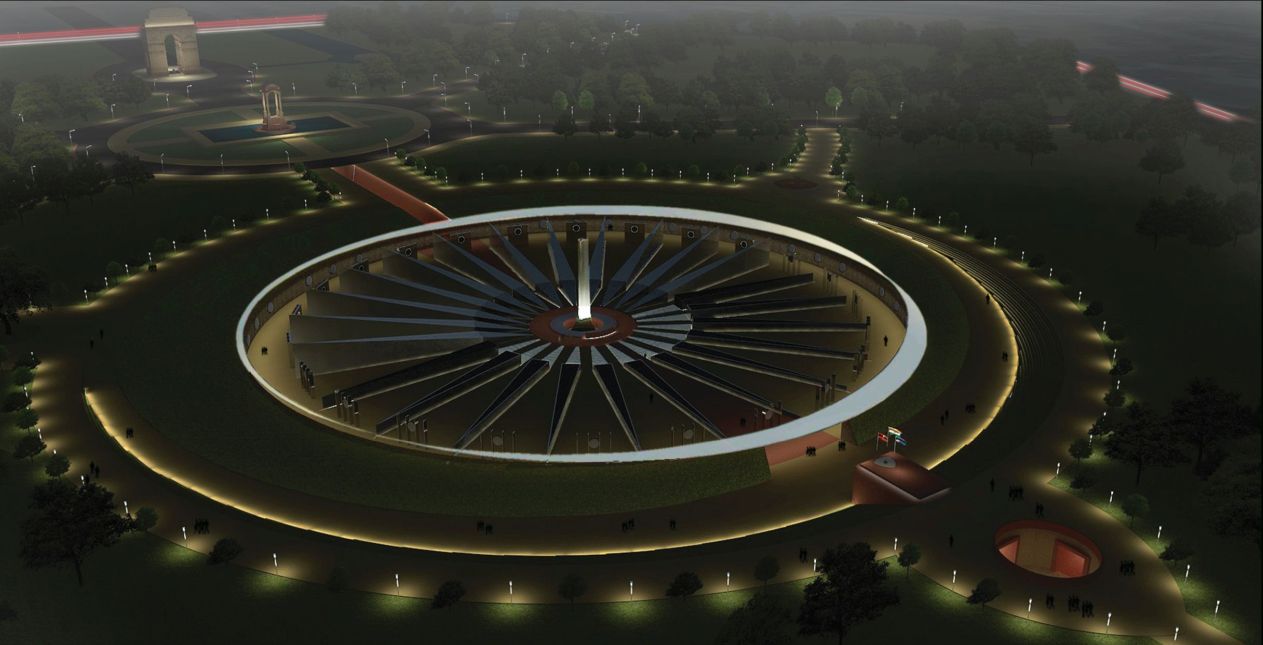 WAR & PEACE AS CYCLICAL: Marking Independence as a point of awakening and consciousness.

The Memorial is visualized within the context of the Central Vista and C – hexagon. Running east-west, the Central Axis is reinforced by the primary spine of the design, which occupies Lawns II & III. Articulated in red sandstone, this axis aligns the Memorial’s ceremonial column and hub with the hexagons central Chattri and India Gate beyond. Commemorating specific battles that epitomize the gallantry of Indian forces, a tree-lined pedestrian boardwalk gridles the monument’s eastern edge. To the west, a linear water cascade and memorial avenue ascends toward India Gate that, as a result, remains in clear sight. Secondary cross axes are formed with the fountains located on either side of India Gate. At the two focal points, are envisioned powerfully figurative commissioned sculptures that represent known military martyr From the lawns, two wide slopes drop down gradually to the wide entrance forecourt of the Memorial, where the underground tunnel connected to the proposed museum, as well as the pedestrian ramps from the eastern broadwalk, emerge. Transplantations and fresh plantations of trees are envisaged along the footpath at the periphery of Lawns II & III. The lawns themselves are intended to continue as open public greens (maidans) that are very precious urban assets to Delhi.

The eternally turning wheel of duty, law and righteousness is fundamental to philosophies. The 24-spoked Asokan Dharmachakra, represents the path to release from death and birth (nirvana in Sanskrit, nibanna in Pali). The official national emblem of India and central emblem on the national flag, it is a prominent feature of the Asokan Lion Capital. Citta-santāna, literally “the stream of mind”, is the stream of succeeding moments of mind or awareness…

It provides a continuity from one life to another, akin to the flame of a candle which may be passed from one candle to another… Santāna (Sanskrit) holds the semantic field of “eternal”, “continuum”, “a series of momentary events” or “lifestream”… The mind stream (santāna) increases gradually by mental afflictions (kleśa) and by actions (karma), and goes again to the next world. In this way the circle of existence is without beginning… Focus on the 24 dharmic qualities to create a sanctuary that represents the armed forces as the nation’s conscience keepers. Harmonize with urban context. Respectful not brash or iconoclastic.

Chakra represents time as cyclical. In linear movement, Chakra shows time to be historical. Chakra represents the eternal through the continual relationship between hub (centre), spoke (radius) & rim (perimeter).Time is believed to be both cyclical and historical, to do with cosmological patterns and with human contingencies. Consciousness of time and it’s many intersections — the time of ancestors and our time, periods of peace and occasions of conflict — shapes our sense of being. Memory and history are never fixed. Our sense of time provides a shared horizon for reflection. It is over time that we protect and project ideals that have been hard-won, and ideals that are continually negotiated.

Geometry and significance: The topological continuity of the curving shape is articulated in the design as a metaphor for the infinite turning of the Dharmachakra wheel. Technically, a mobius band is defined as a non – orientable surface with one continuous side formed by joining the ends of band after twisting one end through 180°.

Function: The canopy structure encircles the Memorial plaza, providing rain cover and shade to the wide ambultory passage along the monument’s periphery. It serves also to visually frame and connect the sunken core of the Memorial with the surrounding landscape, creating a dynamic skyline from within the space.

At the very heart of the Memorial is a Column of Eternal Light. As the largest self-supporting glass structure in the world, the Column offers a unique and awe-inspiring tribute to the spirit and sacrifices of India’s military.

Situated at the hub of the Memorial Dharmachakra, the Column connects the crucial ideas of Dharti (territoru) and Dharma (Duty). Even as it catches and reflects the light of the sun, an undying flame burns within it, protected from wind and the elements. Using glass, fire and concealed illumination, the Column offers a light yet visually-powerful and contemporary rallying-point for the commemoration of generations of brave soldiers from across the nation. It articulates the forces that draw us together and drive us towards greater meaning.

The Column thus powerfully connects the earthbound churning of human affaris, with our eternal aspiration for freedom and higher purpose. It links Land and Legend.

The sanctum is guarded by 6.5m tall, framing structures, 12 monoliths in stone and 12 fin clusters in gunmetal, that hold aloft discs bearing the 24 dharmic exemplar qualities. They ring the ambulatory, segregating it from memorial avenues and ceremonial plaza respectively. Conceptually, the two types carry forward the notion of the armed forces in times of war and peace respectively.

The sleek metallic fin provide visual porosity to the ceremonial plaza and represent how the armed forces afford our democratic nation its freedom and alleviate the periodic calamities. The solid monoliths in stone, on the other hand block visual access to the memorial avenues, for privacy, representing stoic defense in times of war. The walls are constructed in rubble gabion, on their outward face and in sandstone ashler, on the inward face. The gabion stones procured from the different regions of the country represent the secular credentials of a uniform fighting force.

The landscape design is detailed for both climatic performance as well as contextual  suitability.

The water bodies are designed to provide adiabatic evaporative cooling,  dropping the ambient air temperature significantly during the summer through natural evaporation that would increase the moisture content in the air as well.

In the humid months, the ventilation is enhanced by a simple heat exchanger and ventilator. Installed within the water reservoir below ground, the system uses  natural  temprature difference (air to water) to drive a gentle breeze through the center of the ceremonial plaza.

While the sanctum is timeless, the tree-lined Eastern Broadwalk girdling the monument’s road edge is designed to be a legible timeline, commemorating specific battles that epitomise the gallantry of Indian forces. The timeline is marked by periodic change in paver stone and commemorative signage along the kerb.