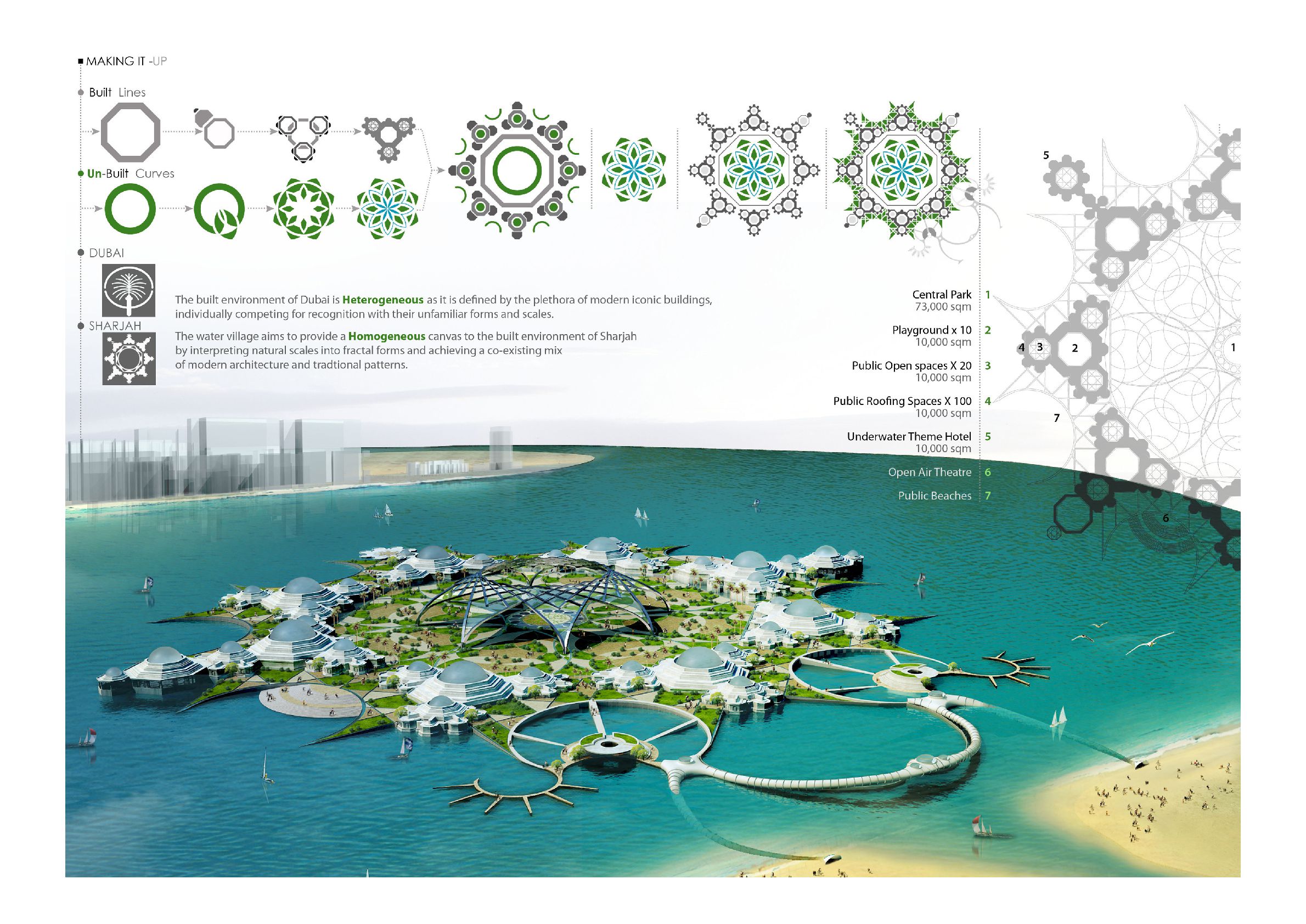 At the northern edge of the emirate of Dubai, lies the neighboring emirate and city of Sharjah – Water City. Historically one of the wealthiest towns in the region and an important trading centre due to its strategic location in the gulf.  While Dubai’s economy is mainly focused on free trade, finance, and tourism, Sharjah plays an important supporting role by providing home to most of the foreign workforce employed in Dubai. On one side stands Dubai’s glittering and spectacular search for postmodern magnificence, while on the other side Sharjah is focused on the preservation of a very strong tradition ill-suited in many ways to integration into a modern, globalized world.

Nevertheless, Sharjah aspires to develop its own identity and it is investing massively in public infrastructure. Sharjah’s lagoons are the most prominent man-made landscape feature of the city. With the objective of increasing the waterfront area, the project aims to bring “water to the desert”.At the center of one of the lakes there lies an artificial island, which is currently perhaps the most attractivepotential location for urban public development and  an icon for Sharjah.

The site, with its prime location shall be sculpted by such an architectural form and function  that it redefines the entire perception of the area, proving Sharjah with a new identity.

The project “ WATER VILLAGE”  is thus envisioned for this site, meant to be a new icon for the city of Sharjah. The “Water Village” is meant to embrace the public-use vocation of the artificial island without ignoring its potential as part of the planned or already built system of public spaces.The “Water Village” will have a total surface of 150,500 square meters, which is the surface area of the island.

The water village has the following Functions:

Dubai has already well-established its identity in the world, and if Sharjah too aims to do so it shall do it uniquely. The built environment of Dubai is Heterogeneous as it is defined by the plethora of modern iconic buildings, individually competing for recognition with their unfamiliar forms and scales.

Sharjah’s water village on the contrary shall form a homogenous canvas with its context by being rooted in traditional patterns and yet being individually modern in its form.

Defined by curves, it forms the center of the water village and integrates with the built in smaller forms similar to the central one.

Defined by the Rigid Geometry,  it is arranged around the central public space and provides the roofed open spaces for protection against Sharjah’s Harsh Climate.

The built and the Un-built engulf each other to form a comprehensive public open space providing a plethora of experiences. The detailed intricate egde of the built maximizes the view of the surrounding area. The outer most layer of the landscape integrates the built into the sea, and provides a series of public beaches for people.

The water village is developed using natural scales and fractals, therefore in spite of being starkly different in its form the experience of the building shall never seem alien and dominating, and people can related to the building just as they relate to the setting where the water village sits.

The Water Village is layered with symbols and energies of elements such as Earth, Water, Air and Fire.

The spectrum of this experience stretches from the macro-scale of built and un-built environments to the micro-scale of the textural variety present in the proposed materials.

Earth and Water are the fundamental elements that can be experienced through the tactile sense.  The two are used in congruency to each other forming the blueprint of the master-plan.

Fire is always present as the embodied energy of materials used in the built structures and the hardscape areas.

The central space is un-built and open to air with the built-mass distributed along the circumference facing the Al-Khan lagoon. This inter-relationship creates temperature-moisture difference between the extreme ends of the buildings and causes stack effect and enables passive cooling.

Being a sacred element in the Islamic culture, moon also symbolizes the transitions of life. The proposed built-environment channelizes water from the Al Khan Lagoon to the core of the water village and empowers the lunar element. 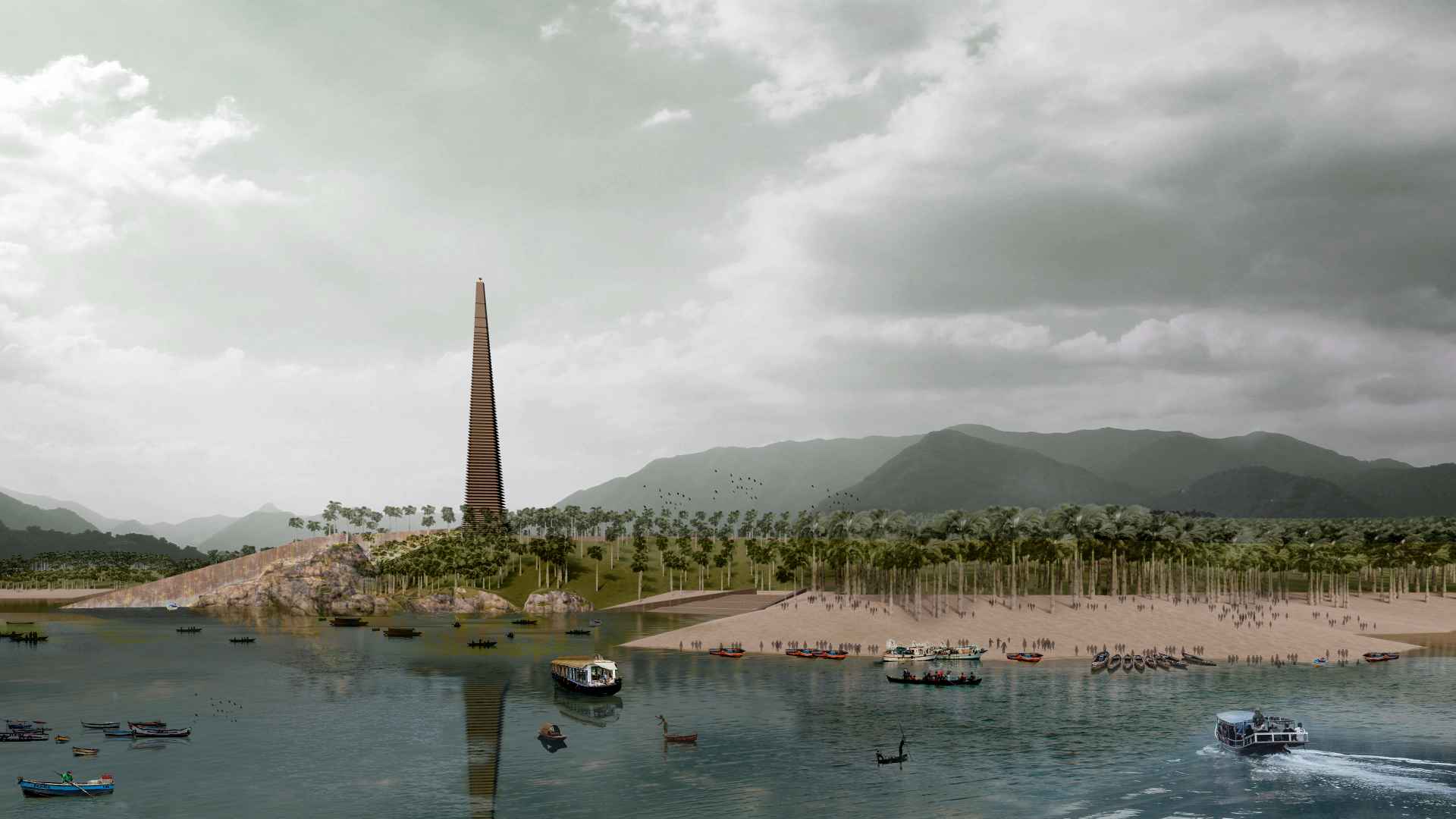